MARKET ENVIRONMENT: by Woody Dorsey. The October Low still has cogency. The World Turned into a new year but not much has changed. We have returned from Davos. The food wasn’t That good and it was cold. The money people are still rich. There is still lots of money around and it will find assets to buy. Markets are still not definitive but fit best with the profile that “Markets are just Messy even though they may evidence a bid.” Rates are Rising and Inflation is sticky. That is still the big picture and it may continue for some time. The Market is a Mess but stocks are still bid. There is no reason to be afraid.

Profiles were for strength into early this year. It happened. The nuance is now for some tactical topping into weakness into Mid-February followed by strength into April, followed by more harsh weather. A Mess. The trends are still up from the October Low’ believe it or not, as you see. Still, it is like s see saw. Up, Down and then again. Allow for that. It is okay.

“Lows in Financial Culture happened last Fall.” Sentiment came in today @ 82% Bullish. It trades well. Maybe too well. All of the Global Negatives are still boring? We know all about it. Yes, Nothing, may be clear for some time. Inflation continues as does the, War.  “Stocks are still in some sort of a congestion process. Investors ‘get’ that a Low may likely be in, but they do not like that idea. Stocks don’t care. It is a cognitive Mess. Talking heads like to obsess about what they don’t.t know. Everyone is forecasting everything but no one really knows anything Don’t believe in anything but a Messy Market. That may mean more of a confusing sideways market for this year. Get used to it?

As noted: “There is no reason for Fear. Caution is not Fear. There isn’t any Need for Greed The profile allows that an absolute low occurred but there is no time to be a hero.”

NEAR TERM: Investors are still obsessing on big pictures’ which are not clearly happening. Every week seems like a new week. It is.

INTERIM TERM: Stocks will eventually better ‘bottom’ on a future final Rate Rise or, the discounting of that rise? This Early 2023 recovery High, as expected, and is expected be followed by a classic failure later this Spring. The Mess will continue.

DORSEY MARKET SENTIMENT: The negative sentiment nadir in October was not surprising; You could smell that sentiment extreme happening. ‘A sly bottom’ occurred. That was a key zone in the market The market still REMAINS dodgy overall but it is improving. Sentiment and markets are basically still in an elongated recovery profile. The pattern is up into April and then down again.

MARKET SUMMARY: Repeat: “This is not a Market Environment for extreme Market Beliefs.” Markets are still on a Tightening rope. Stocks are still playing out, a big messy sideways game. The market does not want to let you understand it. The rally from October is still rolling, and still rolling over at its own pace.

Technical View by Gary Dean: The market mess chickens running around without heads trade continues. (No chickens were hurt during this report 😉 ) We had some sell signals right at the previous highs and then we saw the buyers step in at support. I have been watching without pulling the trigger on a trade, but I do see one setting up soon.  One can break this short set up by layering in just 2  50% trade size-using 4040 or 4050 (your call on the first entry) and 4100. It looks like a pretty safe trade, but I will keep a tight leash on this trade. I don’t want to be holding short side if the bulls decide to close the 4218 open gap. But I believe that won’t come until we make the low in February. 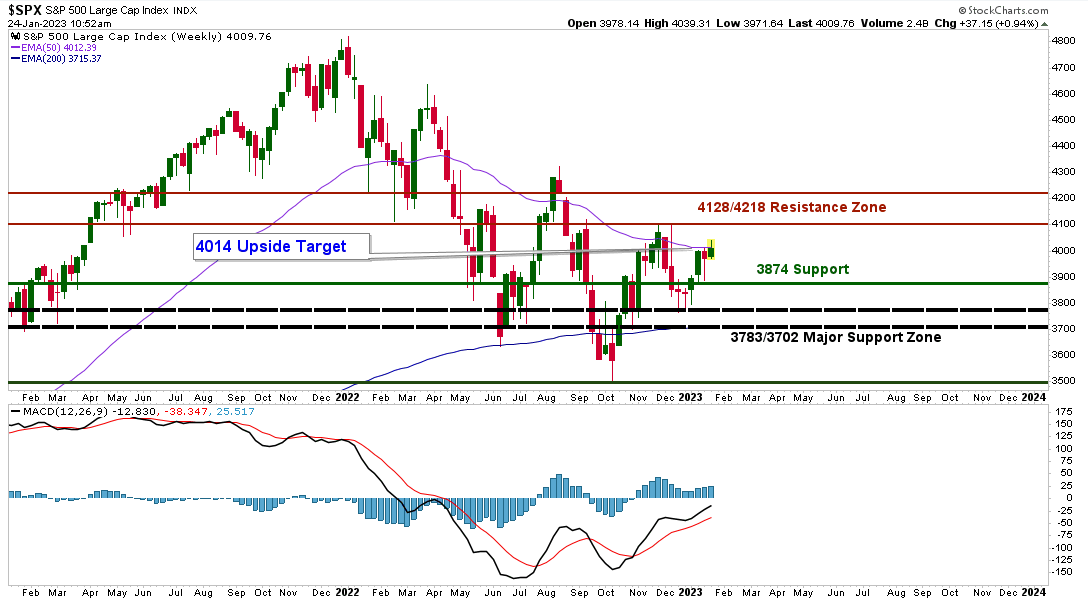 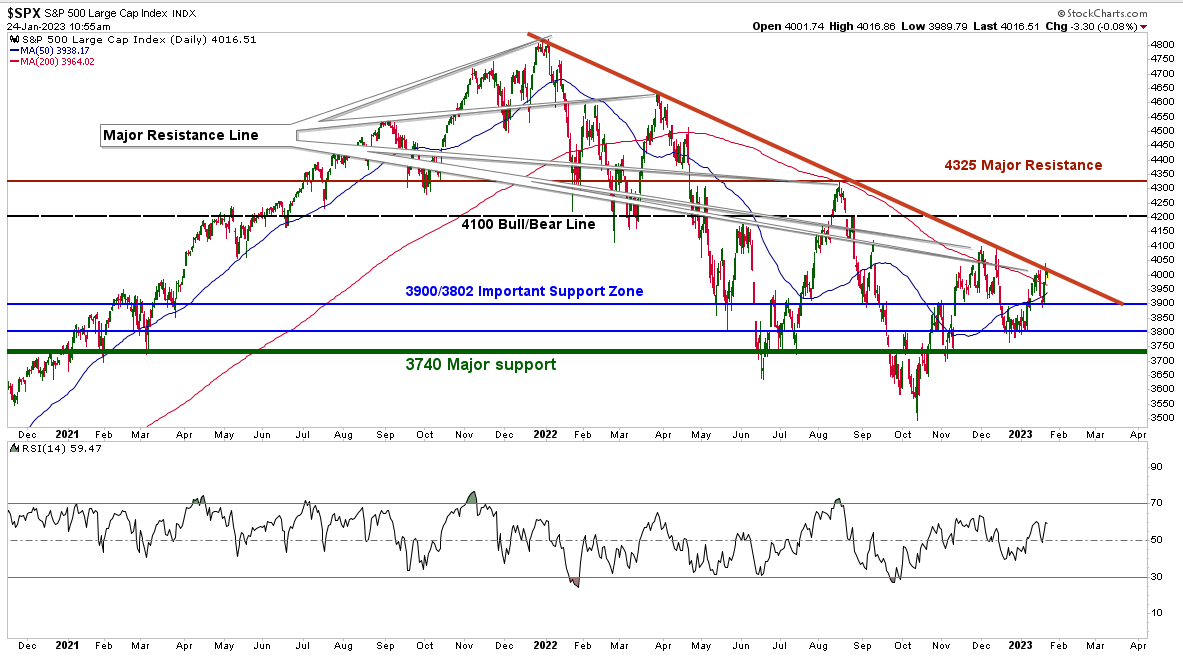 There is still some work to do to create the bearish divergences/sell signals on the 60’s. A higher high for price as the momentum indicator makes a lower high will trigger the sell signals. 4047/4100 are the next 2 major resistance lines. But the bulls will remain in control until the bears can press price below 3990. 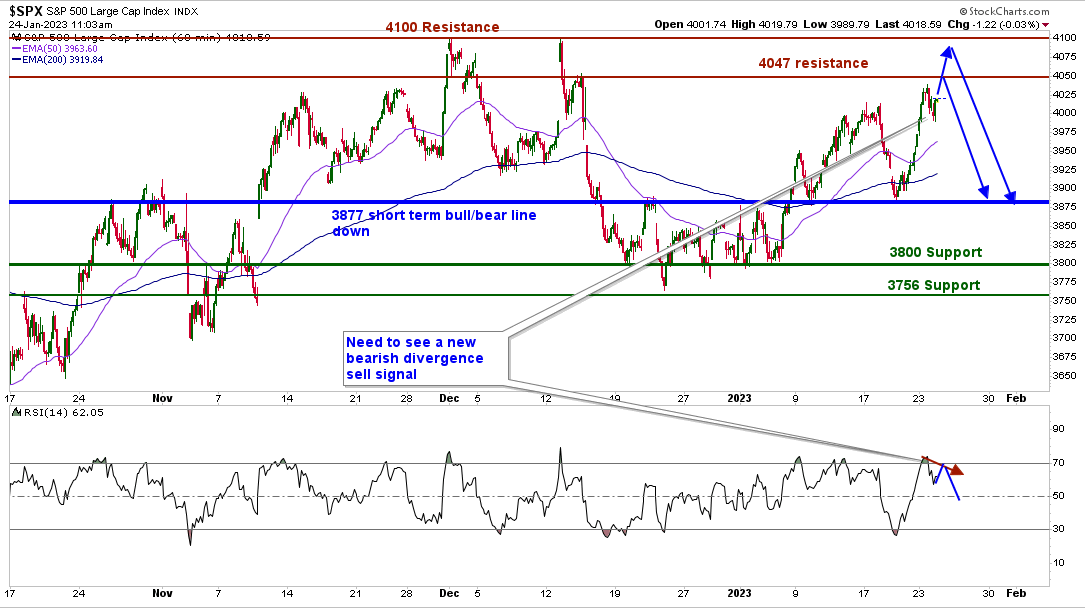 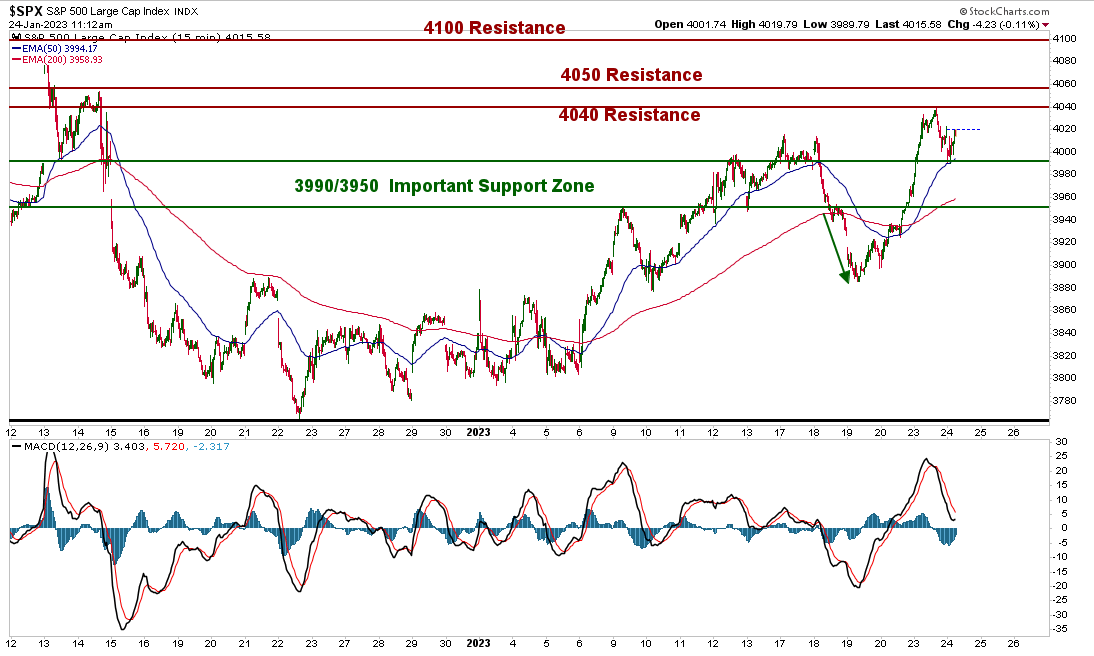 Summary:   The decision to watch this up/down/up again mess, seems like the correct one. But new rally highs will set up sell signals and the wave structure fits the profile to get short. I am going to be conservative with this entry and wait for 4050/4100 as my triggers to build my short side trade. G

Information is for paid subscribers & may not be copied or distributed. © Copyright 2023. The information contained herein was provided by  Sentiment Timing and/or its publishers does not make any representation or warrant with regard hereto, including but not limited to those of accuracy, completeness, reliability, timeliness and/or infringement on the rights of third parties. This Publication expresses a view on the markets but is not intended to provide any specific recommendation to buy or sell any security. Investing is Uncertain and always carries Risk. Of Losses. Subscribers should always assess Market Risk parameters with their broker or financial adviser.